Is God a proponent of violence? Does He condone the rampant fighting and killing seen in the Old Testament? Does He encourage it? How come God seems so different in the Old Testament from the New Testament? These are just a few of the questions people have when they begin delving into the books of the Old Testament. Juxtaposed to the gospels, they exhibit a stark contrast both in the content as well as the underlying message. How do we explain the seemingly contradictory nature of the two Testaments and their content?

On a segment of The Faith Explained, Cale took a look at the common reaction to these troubling passages and showed what approaches we can take to reconcile these writings with our Catholic Faith.

As an example, Cale first presented chapter 15 of 1 Samuel. “‘Go, now, attack Amalek, and put under the ban everything he has. Do not spare him; kill men and women, children and infants, oxen and sheep, camels and donkeys.’” (1 Samuel 15:3) This is quite a shocking and violent command from God. It’s so unlike the way God is presented in the New Testament that a 2nd-century bishop named Marcion of Sinope posited the idea that there were two different gods: a malevolent demiurge in the Old Testament and the benevolent savior of the New Testament. This was of course denounced as heresy because Christians know that there is only one omnibenevolent God.

Cale explained that to correctly analyze and interpret the difficult passages of the Old Testament, we must look at them through the lens of the time. Accounting for the context of the era does not mean justifying the immorality that was so rampant but taking into consideration the evolution of the standards of human living. At a far more imperfect, crude, and violent time in history, slavery was a fact of life, polygamy was commonplace, and brutal military coups happened every day. Of course, these things are intrinsically wrong and over time, through God’s grace, they have been replaced with civility and order.

“Even though they contain matters imperfect and provisional, the books of the Old Testament bear witness to the whole divine pedagogy of God’s saving love: these writings ‘are a storehouse of sublime teaching on God and of sound wisdom on human life, as well as a wonderful treasury of prayers; in them, too, the mystery of our salvation is present in a hidden way.’” (Catechism of the Catholic Church, 122)

Because Jesus Christ came to complete and fulfill scripture, Cale said we cannot read the Old Testament as a separate entity from the New Testament. We must “read the old in light of the new”. When Jesus told us to love our enemies, that was a revolutionary idea, even to the Jews of His day. It was a departure from the practice of retribution against one’s foes as was seen in the Old Testament. “It was not done that you would spare a conquered enemy in the way that we might like. In fact, very often, when peoples were defeated in battle, the survivors would be taken into the conquering community and made to be slaves, concubines.” This was a common practice amongst enemies of the time, so death was preferable to the degradation, dehumanization, and sexual misconduct of a conquering army. A prime example of this can be seen in the mass suicide that took place at Masada fortress at the end of the Jewish-Roman War.

The second way to balance the Testaments is to examine the way the writings have literally been translated. As you rotate from one language to another, there are always chances of messages getting lost in the process. For instance, in Deuteronomy, it says that God commands the “utter destruction” of seven nations by the Israelites. The word that became “destruction” or “annihilation” is herem, which can also be translated to mean “ban” or “prohibit”. So, the authors of the Old Testament could have meant vastly different things than the way we have come to interpret them.

The third way that we can approach the violence is to take it at face value and essentially propose that God has no reason to limit the methods of His plan. Why can’t God use force to advance salvation history? He’s God. He gave us life, why can’t He take it away? God doesn’t delight in the savagery of violence and slaughter like He’s requiring a human sacrifice to sate His bloodthirst. According to the Old Testament writers and the stories within, retribution (divine or otherwise) was common and well within the expected outcomes of life events. Wickedness begets justice and so on. Is it really so shocking that God punishes pagan immorality through violent force? God even punishes the Israelites, His Chosen People, when they depart from His ways.

While not a comprehensive answer to this difficult question, these approaches at least provide guidelines in the way we read through scripture without completely shunning the Old Testament. “I would suggest that as Christians we cannot simply reject the witness of scripture in the Old Testament. Jesus treated the Old Testament as the authoritative word of God, and so must we. It may be necessary to re-interpret the texts in context to understand exactly what is and isn’t being commanded. We affirm that God is right in judging the world. Ultimately we need to re-contextualize the violence in light of the cross of Christ.” (Andrew Judd, Thinking Through Old Testament Violence, 2019)

Painting Featured: The Fall of Nineveh by John Martin 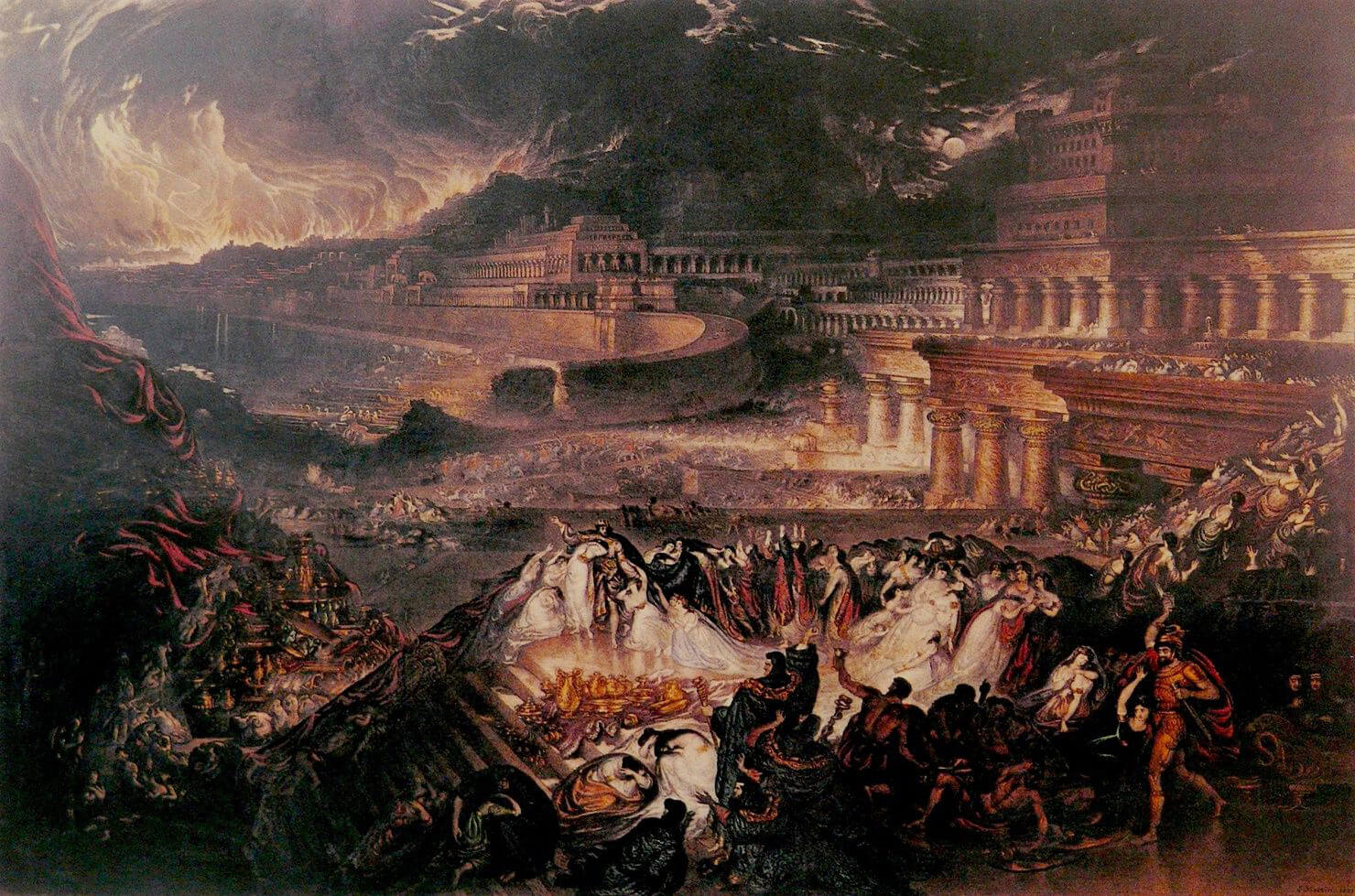