Following the discovery of ancient synagogues in Galilee, archeologists and historians uncovered what clearly appears to be the depiction of Zodiac symbols and figures on the floor. What does this imply? Did a portion of God’s chosen people depart from His teaching on omens and superstitious practices? Did the Jewish people have an accurate understanding of the Zodiac and its ideas?

Cale spent a segment of The Cale Clarke Show answering these questions and taking a deeper dive into these archaeological findings to attempt to reconcile these opposing belief systems.

“In ancient synagogues in Galilee, they found Zodiacs on the floors of the synagogues,” began Cale. “This is wild: astrological signs, the horoscopes, Cancer, Libra, Gemini, they’re all there. What in the world is this doing in a place of worship?”

Did the Hebrew people give in to paganism? Well, to figure out how all this came about, Cale went back to the original discovery of the historical site of the synagogue, found in the Valley of Jezreel in 1928. Some settlers had come to a swamp in the valley that had been accumulating water for a thousand years. First, they drained the swamp so they could turn it into farmland. Then, as they began to dig a foundation, one settler hit something in the ground. It was the synagogue floor.

As Israeli law states, as soon as a historical site is discovered, all construction in that area must cease until the buildings, artifacts, and other historical objects have been secured. As they slowly unearthed the synagogue that the settler had discovered, they soon realized that the floor had been perfectly preserved. Dating it back to the early 6th century, they determined that an earthquake had taken place soon after its construction and the ceiling had collapsed onto the floor, providing the perfect shield to preserve the floor from the elements.

On this synagogue floor were three enormous mosaic panels depicting different figures, symbols, and signs. The biggest, central panel has an image of a woman on each corner, each woman representing one of the four seasons. In the center of the panel is a large wheel. The hub of the wheel depicts a man driving a four-horse chariot and in between the twelve spokes of the wheel were the twelve signs of the Zodiac: Aries, Taurus, Gemini, Cancer, Leo, Virgo, Libra, Scorpio, Sagittarius, Capricorn, Aquarius, and Pisces. 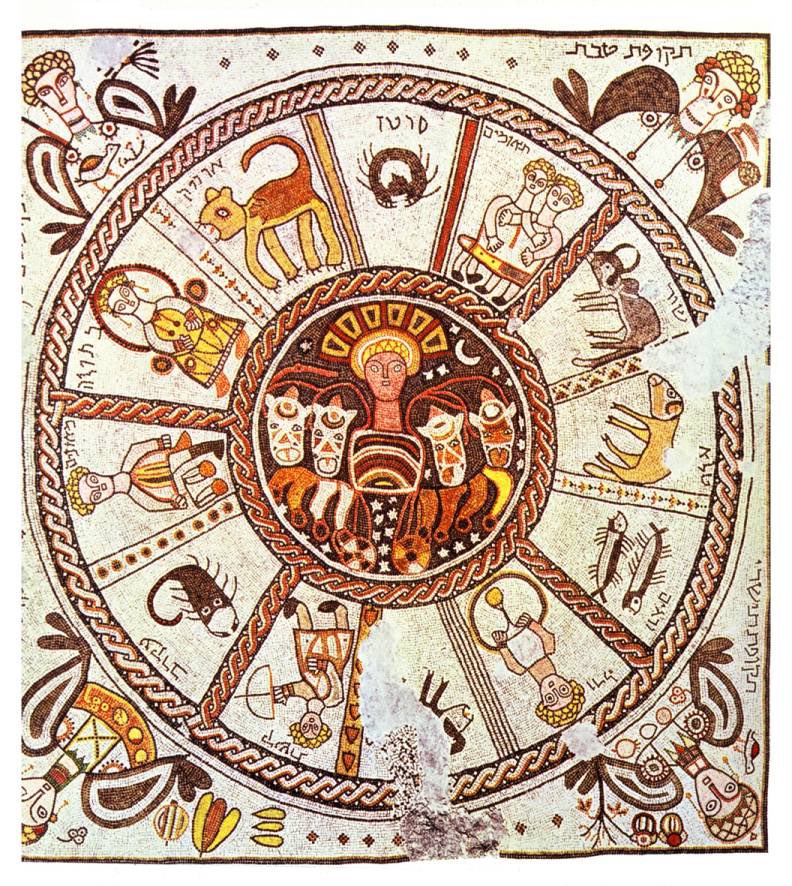 Who is that figure driving the chariot surrounded by the moon, the stars, and sun rays? It appears to be the pagan god, Helios. So very clearly, these are pagan concepts and images being depicted in this Jewish synagogue. Why? Did the Jewish people fall away from the one, true God? Were they indulging in horoscopes, pagan practices, or superstitions? The Church and the Jewish Faith explicitly condemn horoscopes, palm reading, tarot cards, necromancy, seances, astrology, and other forms of superstition. The idea that the universe is a machine and has already mapped out our destinies is counter to the biblical worldview and sinful.

Well, the archaeologists handling the Jezreel dig site, who happened to be from The Hebrew University of Jerusalem, decided that there must be more to this than meets the eye. They kept digging and they discovered more panels, images depicting the ark of the covenant, palm fronds, eternal light, the menorah, an incense spade, and finally the sacrificing of Isaac. So clearly, the synagogue still had ties to the Jewish faith. Upon further inspection of the Zodiac panel, they also realized that the seasons and the monthly symbols were out of order; they were mixed up. So, if it wasn’t there to accommodate astrology, it must be there for another reason.

Archaeological expert, Walter Zanger, says that this was actually part of a Jewish practice that was common in the region of this synagogue but never gained popularity elsewhere. The construction of these pagan mosaics was not to indulge in the practices or use it as some sort of calendar, but rather to depict the universe as a whole – the seasons, the months, the sun, the moon, the stars – and show that there is One beyond it all. God. What was thought to be Helios is actually the one, true God.

“His clothing was white as snow, the hair on his head like pure wool; His throne was flames of fire, with wheels of burning fire.” (Daniel 7:9)

“That’s what’s really going on here,” said Cale. “This is the one who rules over all of these things: the seasons, the stars, the moon, the sun, our lives as well.”

The Jewish people placed these signs of the physical world and material universe on the ground so that above it, we could look beyond them and see God, creator and ruler of all of it.

Tune in to The Cale Clarke Show weekdays at 5pm CT.